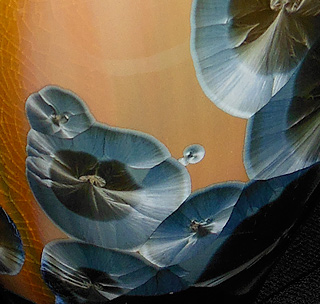 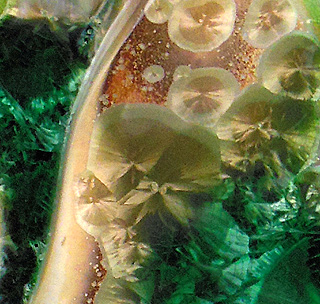 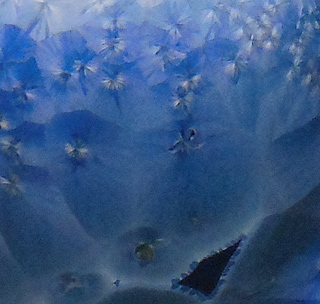 Crystalline Glazes
Crystalline glazes attracted me because of their surprising beauty and translucency, because they bridge the line between art and science, between chance and design. The zinc-silicate crystals form in the cooling cycle of the high-fired kiln. But that simple statement belies the numerous factors that influence the overall quality, size, shape, and placement of the crystals, and ultimately, the individuality and the excellence of the piece.
First, the glaze formula will determine the potential crystal formation, with the unusually thick glaze application being extremely important. I use an airgun to create layers of glazes, both to get the correct thickness and to create colors that move seamlessly from one to the other.
The glaze must be so thick, in fact, that for the style of crystals I seek, the glaze has to run off the pot. To accomodate this, I cut a pedestal that fits the foot of each piece and stands within a clay dish to catch the excess glaze. After firing I torch and/or chisel the pot from the pedestal and use a bench grinder to smooth the bottom.
The firing of the piece, both the rise and fall of the temperature, also determines crystal formation, placement, and size. The high end temperature for crystalline glazes is very important and varies with the formula. I fire the kiln upwards quickly, but slow the kiln at the end in pursuit of an unblemished glaze and greater spaces between crystals. Sometimes I hold the temperature for up to six hours, slowly dropping from 2050-1950 degrees, moving up and down within that temperature range to create a halo effect around the crystals.
While constantly experimenting with the formula, the colorants, and the firing schedule, the possibilities of working with crystalline glazes are endless. Firing with gas instead of electricity, or refiring the piece in a different kiln atmosphere will also effect the crystal formation and background color.
Although science is a large part of the crystalline process, the journey feels quite magical to me. I open the kiln and each piece is a surprise. A few pieces are exciting, a few disappointing...but each leads me to the next piece to glaze, the next firing. Because I know that as much as the formula and the kiln and the science matter, it is how I apply the glaze and the interaction of all these variables that creates the magic and excitement in every kiln.